WHAT TO SEE IN CANTABRIA

Some of the best places to see in Cantabria

These are our recommendations on What to see in Cantabria and the surroundings of Barcenaciones, we hope you enjoy them!

In Barcenaciones there are three estates with incredible trees.  In the Quinta Capilla de San Antonio we can highlight three: a Cedar of the Atlas Cedrus atlantica,  26 metres high, a Lebanese Cedar of 22m, and a common Cypress of 22m.

In Barcenaciones we can also see numerous Casonas (typical manor houses of the area) from which we can highlight the House of the Palomares Marquis or the Quinta Capilla de San Antonio. Barcenaciones became part of the first constitutional townhouse that was formed in the valley of Reocin.  As of its architecture, we can highlight the parroquial church of Saint John Baptist of the XVII century, inside we can see an altarpiece of the XVIII century.

One of the first concrete bridges was built between Barcenaciones and Golbardo towards the start of the XX century( 1903), which is now considered a national monument.

Every Saturday, the Weekend Market at Cabezon de la Sal takes place. From 11am to 2pm. 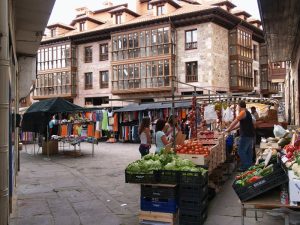 In the weekend market you’ll find several section: produce from the area, some of it organic; clothing and shoes, local delicacies, etc. One of our favorite selection is the local delicacies one, where you can find honey, orujo (local liquor), local cheeses, cold meats, artisanal breads, desserts and other local sweets. Overall, the products are of great quality and very hard to find elsewhere. The ambiance is very nice, except on peak season, when it can get quite crowded.

In Cabezon de la Sal there is a tourism office that gives information on what to see in Cantabria and the area. Just opposite to the tourism office there is a stand with cold meats, cheese of the Picos de Europa, honey and orujo, it’s one of the best! Ask for Ramiro, he is a great guy and the person who knows the most about cheese in the area. He’ll let you try before you buy anything.

On the outskirts of Cabezon de la Sal towards the west, there is a replica of an ancient Cantabrian Village. Its great to get an idea of how the ancient inhabitants of this land used to live.A must see in Cantabria for the young ones and the history lovers.

Very easy to park your car.

Behind the protection of the great stone walls you’ll see the houses and the village. Sitting on the terraced slopes, the circular houses have been built on a 1:1 ratio according to the historical and archeological researches. A walk around the village will give you a great idea of how the ancient inhabitants of this land use to live. Their kitchens, 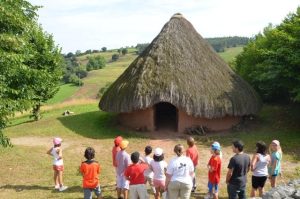 sewing looms, ceramics and other tools show the development from the Bronze age ( towards the VIII century BC) to the arrival of the roman legions led by Augustus.

Known as one of the best places to see in Cantabria, this medieval town of cobble-stone streets is impressively conserved. The visitor will easily be transported to the past in a town that has been considered a Historical-Artistic ensemble.

Santillana del Mar is popularly known as the village of the three lies. It’s not santified, its not flat (llana) nor its on the sea (mar). The majority of its inhabitants live off agriculture or tourism.

Santillana del Mar is considered one of the most beautiful towns of Spain, and it was defined as such by french philosopher Jean Paul Sartre.

One of the ‘must see in cantabria’ is the “Colegiata de Santa Juliana”of the XII century. It is a very important romanic monument. During the months of summer, the town is quite packed. We recommend going towards the afternoon when the number of tourists decreases. There aren’t many restaurants we recommend there as many of them are oriented for tourists, nonetheless the “Parador de Turismo” is a very nice option to eat. 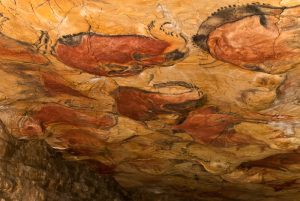 Birthplace of bishops and archbishops, Comillas is known as “The Town of the Archbishops.” The old square, the church and some of the houses in the center of the town are an excellent example of the popular architecture of the XVIII century. The rest of notorious buildings are from the end of the  XIX and beginning of the XX centuries. This was the time that Comillas became the noble and aristocrathic village it is now. It was an Indiano (spanish emigrated to America) called Antonio Lopez y Lopez who gave this village its prestige. He emigrated to Cuba and founded the shipping company called La Trasatlantica. His financial power and friendship with the royal family of Spain granted him the title of First Marquis of Comillas, which was given to him by Alfonso XII in 1882. The town became a holiday place for the royal family during the summers of 1881 and 1882. It was also during this time that the town became the first place to have public lighting in Spain.

The Marquis also created the Palace of Sobrellano, of neogothic style, as well as the modernist palace of El Capricho designed by renowned architect Antonio Gaudi. Opposite to these architectural masterpieces, we can find La Universidad Pontificia de Comillas – also with neogothic style. Its construction was also paid by Antonio Lopez y Lopez and its greatness and characteristic redish color make a real treasure to see.

The village has a beautiful beach next to the fishermen’s port. Its coast is included in the National Park of Oyambre.

The cave of El Soplao was discovered towards the beginning of the XXcentury. It’s considered one of the greatest geological treasures of Cantabria with tons of beautiful formations inside.

El Soplao is one of the most impressive places to see in Cantabria. The tour is spectacular. the amount of geologic formations is just overwhelming. It’s undoubtedly one of the best places in which to enjoy the natural magnificence that Cantabria has to offer.